The items found on this page were once the post-war possessions of the veterans who had served in the Fourth Michigan Infantry. Many pertain to the various reunions and events that the veterans attended. As the number of surviving veterans decreased through the years, so did the number of mementos produced for those few left. Typically, relics relating to the last few reunions and encampments for these men, are much scarcer than those made for the earlier gatherings which would have had more attendees.

While attending various GAR functions and regimental reunions, veterans of the Fourth Michigan Infantry often wore “ladder badges” upon their outer clothing, quite often a uniform of some sort, whether their original from the war or a GAR post-war outfit that the veteran’s new size might require. Here are some examples of ladder badges worn by men of the regiment:

Moses Carleton’s ladder badge as a member of the Re-org. 4th Mich. Inf. Co. I

The Fifth Corp emblem for a member of the Original, or Old 4th Mich. Inf.

Reunion ribbons were much more commonly worn by the veterans than the ladder badges shown above. Each reunion or encampment provided ribbons for it’s veteran attendees who often kept them as symbols of their continued comradery beyond the war. As the number of surviving veterans decreased over the years, so did the number of ribbons created for those men to wear. 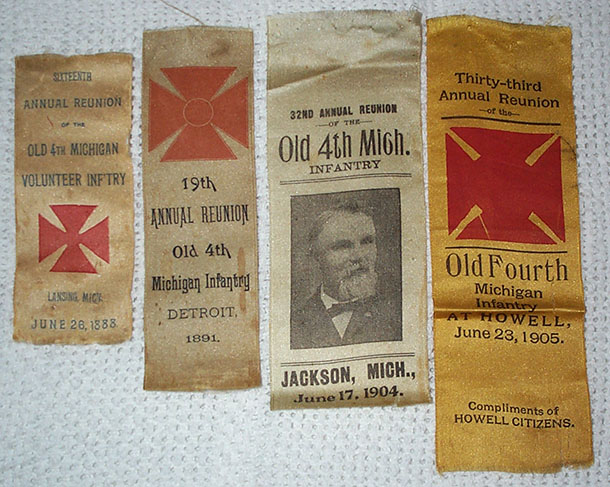 A sample of some of the reunion ribbons worn by veterans of the Fourth Michigan Infantry during their post-war gatherings; Janine Delcamp collection 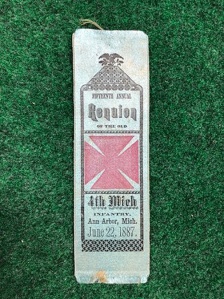 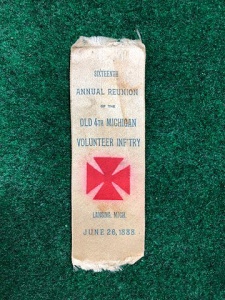 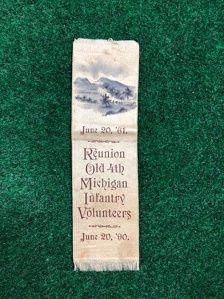 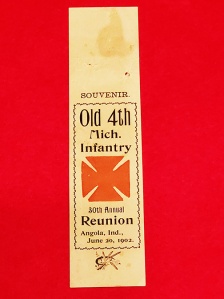 Rare “Honorary Member” ribbon for the 1915 reunion at Hillsdale, Michigan

The ribbon and accompanying pamphlet below are the only known examples that I am aware of. They were produced by Norm G. Cooper, who became a resident of Sturgis, Michigan sometime around 1880 where he took up the life of a fire insurance and pension agent. Shortly afterward he became the editor and publisher of “Cooper’s Coffee Cooler” which was a small newspaper dedicated to the interest of the G. A. R. organization. Norm Cooper became the Post Inspector of the Michigan Department, and Post Commander of A. B. Sturgis Post No. 73 among several other local organizations. Norm had served during as a private in Company F of the 24th New York Infantry during the Civil War, and had been wounded and taken prisoner during his service. Norm died in 1913 in Oberlin, Ohio. 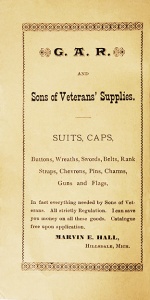 Veterans attending the post-war regimental reunions, and other events held in their honor, were often provided printed programs outlining the evenings festivities. These were often kept as souvenirs by the men. Occasionally, rosters listing the names and cities of the surviving members of the regiment were also included in pamphlet form as well. Here are several examples of a veteran’s ephemera: 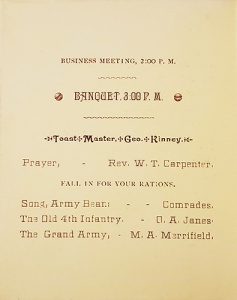 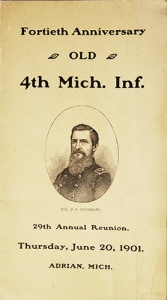 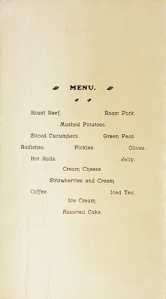 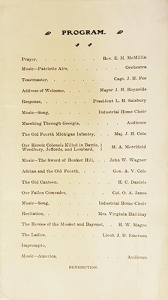 In addition to the ladder badge, veterans would sometimes purchase or have jewelers create Corp badges representing the Corps that their regiment served in during the war. They may have ordered engraved silver and gold badges from jewelers, while others wore brass and / or enameled versions. Each badge was meant to display the pride of the soldier in the military organization he had served in. These are two examples of post-war Corp badges owned by men from the regiment:

Double Corp badge owned by 1st Lt. Melancthon Millerd. He served in the original Fourth Michigan Inf. while it was in the Fifth Corp (the malteses Cross emblem) and then served in the Fourth Corp (triangle emblem) while in the Re-org. 4th Mich. Inf;Dale Niesen collection 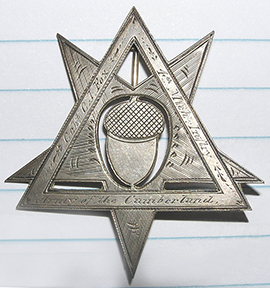 This double Corp badge belonged to Captain Charles J. Fox, Co. H of the Reorganized 4th Michigan Infantry. The triangle is the emblem representing his and the regiment’s service in the 4th Corps, while the inverted star represents their service in the 20th Corps

This engraved coffin plate / badge was typical of those that were popular during the height of the era of Victorian mourning etiquette. Loved ones often removed these plates as mementos of the deceased.

This coffin plate was quite likely kept by the family of Lt. Ambrose B. Curtiss, Co. G of the Fourth Michigan Infantry. Curtiss served as First Sergeant during the Civil War so the rank of Lt. must reflect his subsequent service as a member of the U.S. Army. He served until October of 1870. 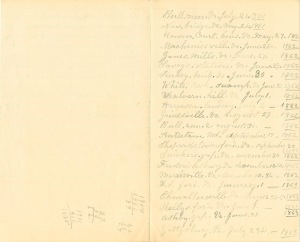 After the war, many soldiers purchased and sometimes published books and pamphlets relating to their service and the war itself. Here are a few examples of such ephemera from men in the Fourth Michigan Infantry.

In the early 1900’s the Senate and the House of Representatives of the Michigan Legislature authorized the publication of the record of the officers and enlisted men  who served from the state during the Civil War. The 46 volumes were published under the direction of Brigadier General George H. Brown which led to the books nickname of “The Brown Books”. Volume 4 of “The Record of Service of Michigan Volunteers in the Civil War 1861 – 1865” covers the men who served in the Fourth Michigan Infantry. It should be noted that the book, though good for it’s time, has several errors and omissions, resulting in problematic research if used as the sole source of military information regarding the service of any soldier in the regiment. This particular copy was the personal property of Private Albert Boies who inscribed several personal pieces of information within it’s covers. 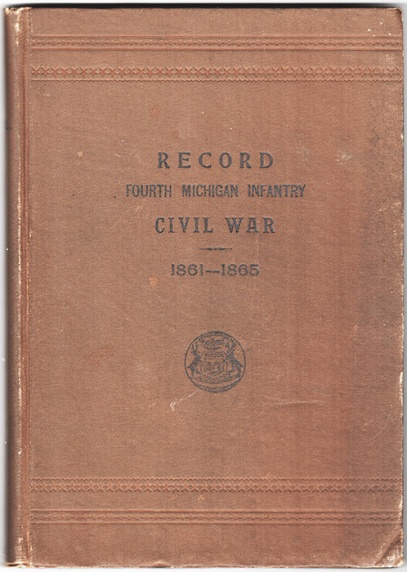 Cover of Albert Boies’ copy of Vol. 4 of the “Michigan Brown Books” 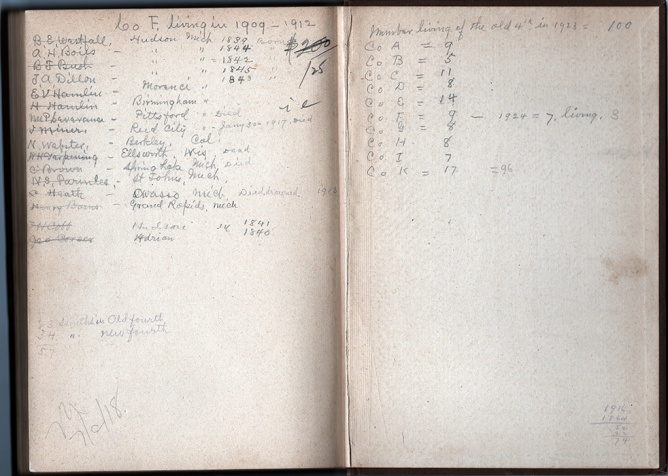 Inscribed back end page of book

This extremely rare little booklet containing a copy of the poem “Gettysburg” was written by Lieutenant Richard Watson Seage who was severely wounded at Gettysburg on July 2, 1863. It was made available to his comrades in the Fourth Michigan Infantry and written for the dedication of the regiment’s monument in the “Wheatfield” at Gettysburg on June 12, 1889. Richard’s poem was also included in the text of the book “Michigan at Gettysburg  July 1st, 2nd, and 3rd 1863. June 12th, 1889” which was printed in 1889 by Winn and Hammond of Detroit, Michigan. 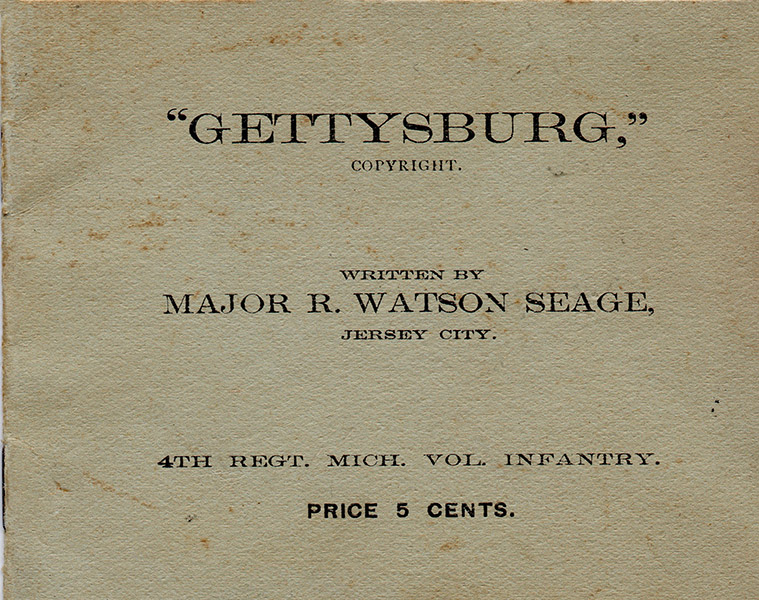 This book entitled “Michigan at Gettysburg  July 1st, 2nd, and 3rd 1863. June 12th, 1889” belonged to Henry Wells Magee, a member of Company  E of the Fourth Michigan Infantry. His inscription is found on the front end sheet of the 179 page book. 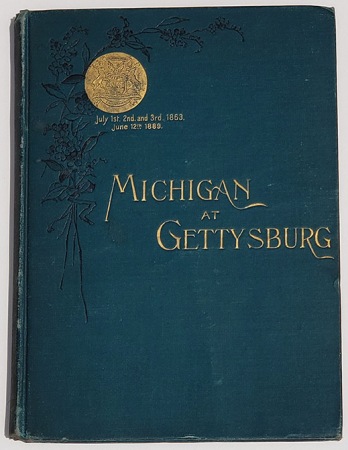 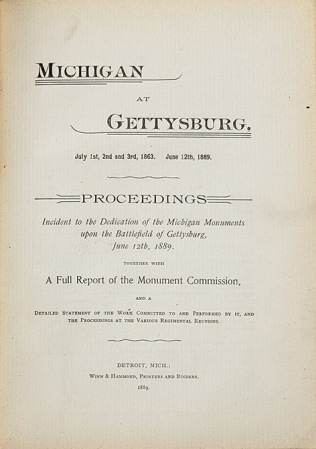 The tile page of “Michigan at Gettysburg”.

Magee’s inscription in his book

Soldiers would could afford to do so would occasionally have an escutcheon, or memorial painted which depicted his military service in graphic detail and with beautiful illustration. The escutcheons are fairly scarce today and typically expensive when found. 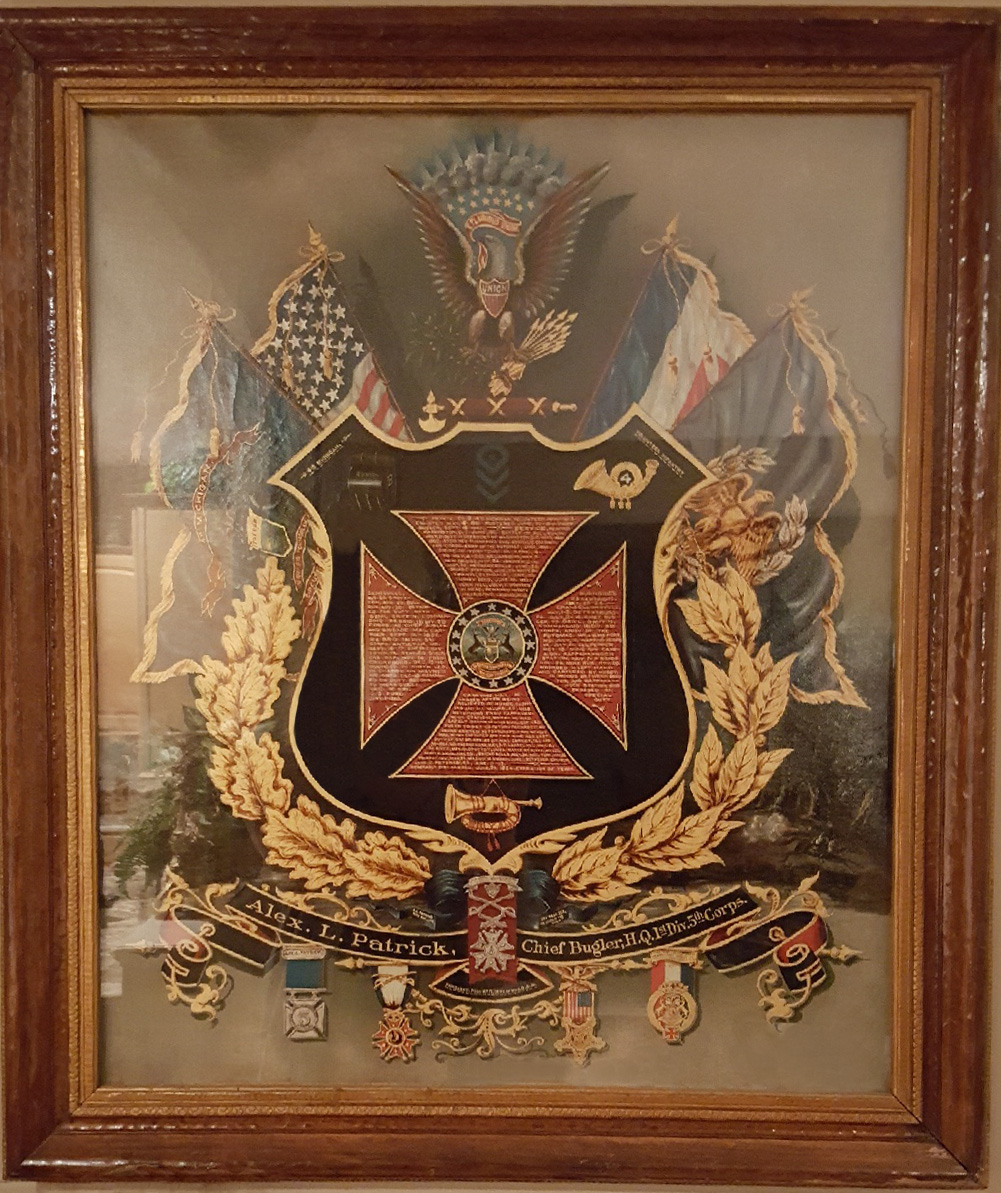 Popular during and after the Civil War, soldier’s would occasionally have an escutcheon, a painted memorial made which conveyed in graphic illustrations the soldier’s military career. This beautiful work was made on behalf of Alexander l. Patrick of Company B of the Fourth Michigan Infantry. During the war, Patrick delivered the regiment’s mail and also served as the Chief Bugler for Headquarters of the 1st Division, 5th Army Corps. (From the personal collection of David Finney).

Many printing companies during and after the war printed lithographs, often very elaborate, to commemorate an individual soldier’s service in his regiment during his military service. This particular one was printed for a member of Company G of the Fourth Michigan Infantry and is being shared through the courtesy of the Bentley Historical Museum:

This postal card shown below was mailed on January 30, 1888 to “Comrade William Cauchie” of Company A of the Fourth Michigan Infantry. Corporal Hiram H. Davis sent it to encourage William to obtain the print shown below the cards, which he had just published.