These letters were written by Corp. Charles B. Rayner (1836-1864) and are published here courtesy of the National Archives.

In this letter, Charles is writing to his parents Oshea (father) and Adah (mother) Rayner. he informs them of the death of his brother George W. Rayner , Co. G of the 16th Michigan Infantry (KIA on May 7, 1864 at Wilderness, Va.) as well as the wounding of another brother, Oshea F. Raynor of Co. K 27th Michigan Infantry ( WIA May 12, 1864 at Spotsylvania Court House, Va.). Oshea would be discharged for disability on December 5, 1864. The Rayner family had 8 sons who enlisted in the Union army. Of those, four including Charles, would die during the war.

I can only drop two or three lines & I do this to let you know that I am alright. But it is my painful duty to tell you that G. W. is dead. He died in the second day’s fight & O. F.  is wounded & in Fredericksburg hospital. I have not seen either of them.

Could not write to you before for news from the front has been prohibited but this morning our captain in command says we can send some mail.

We can send some mail. Father, excuse this short letter for the mail leaves soon. Don’t write till you hear from me again. Yours with love, — Chas. Rayner

Our Michigan Regiments are all cut to pieces & many others.

P. S. Father, don’t forget that Levi Clark owes me 40 dollars with no receipt. (Whitehead is witness) He also holds a note of 1.25 dollars against Rob Clark & he holds the receipts for those notes that Sile Ent has. Don’t forget if anything should happen. Your son, — Chas Rayner. 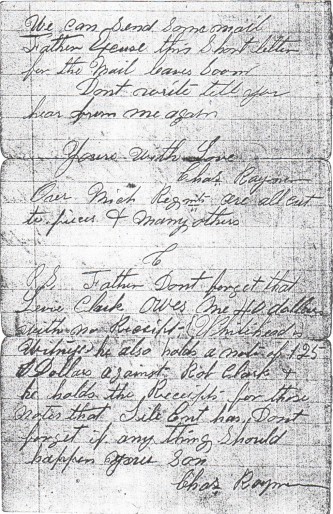 This letter was written by Corp. Charles B. Rayner (1836-1864) as he lay in the hospital suffering from a severe shoulder wound that he received in action on June 3, 1864 at Cold Harbor, Virginia. He would die from that wound two weeks later, on July 2, 1864, in the Third Division General Hospital in Alexandria, Virginia, from where he had written this letter.

I acknowledge to have received yours some time ago & I sat myself down & wrote you the same day [but] just as I had finished it, we were ordered to march so I put it up & marched going into battle. Soon after [being] ordered to retreat, I lost all letter with the rest. Since then we have had to march almost every day — sometimes all night. On the 3rd day of June, after passing through one of those terrible charges in an open field through shot, shell, grape & canister [and] after going through this dangerous [scene] and getting so near behind the breastworks, I thought I was safe…

Jim, if you can send me 2 or 3 dollars to buy some little things with, I will call you a good fellow & give you 1 dollar interest. I suppose you have heard that G. W. Rayner is dead. He was killed the 6th of May. Poor fellow. I never got to see him. O. F. is wounded. I have not seen him. I am tired out. Goodbye. I am in hopes to be able to sit up soon. Jim, write soon. 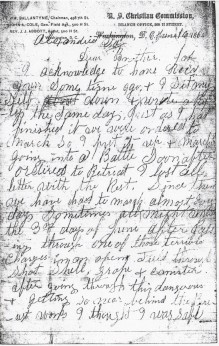 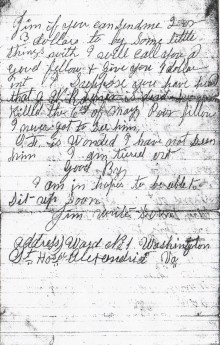