Edmund Bliss enlisted as a Private in company D of the Fourth Michigan Infantry on June 20, 1861. He transferred to the Invalid Corps on September 15, 1863. Edmund died on March 29, 1897, and is buried in Bay City, Michigan.

These letters were written to Edmund’s friend, Mrs. Barbara Hacker, and are provided through the courtesy of the William L. Clements Library.

Your letter of the 14th came to hand in due time and I was pleased to hear from you and to hear that you was well. I also received one from Roloff written the 18th. He was also well and in good spirits. He seems to like it better where he is in Kentucky than he did here in Virginia. The division to which I belong has moved, but where I don’t know. The Ambulance Corps to which I belong, have not moved yet, but expect to move at any moment. They are waiting [for] orders. We will go before long however. You wanted me to tell you the reason of my not going any farther than Baltimore with you. I will say that I was very sorry for disappointing you, if you consider it a disappointment. But the reason of my stopping there was that I could not go any farther than there on my furlough, it being out, until I got transportation from the Provost Marshall of Baltimore to go to Washington. Then when I arrived at Washington, I had to stay there one day and two nights before I could get transportation to my regiment. I think you must [have] left Baltimore before I did [by] some three hours, it being 8 in the evening when I left there. I hope this will be satisfactory to you as I  don’t, for one moment, think you will blame me when you read this. I was very sorry that it so happened, but it was something that I could not help. I hope you will excuse me.as I have but a little time to write. You must excuse a short letter this time. I am well and I hope this will find yourself and family well.

My love to all, I remain as ever your friend,  Edmund R. Bliss

I received yours of the 31st day of May, but we have been marching almost every day so I could not answer it before . And you must excuse me for not writing before [now]. I am well and I hope you and your family [are] well. We have had a pretty hard campaign since [the] last [time that I] wrote to you. We was in the battle of Gettysburg. Our company had 31 men when it went into the fight and when it came out it had six men. I tell you that they fell thick and fast. I got a letter from Roloff the other day. He was well then. It is getting later and I must close. Give my respects to all inquiring friends. 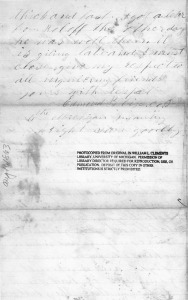