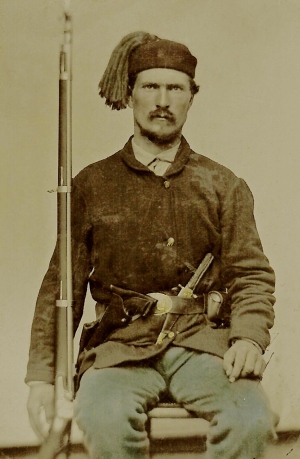 This letter was written by Harrison Daniels who enlisted in Co. B.

I never tho’t I should ever have an occasion to write to you from a hospital but it is the result of war — the enemy of all mankind — and it has proved an enemy to me. One of the enemy’s leaden messengers visited me as one of its victims, as well as thousands of others, but I escaped without a serious injury to what some received. My wound is in my left thigh. The ball struck pretty high up, and came out near my knee, without hitting the bone, but making two good sized holes, which will take some time to heal up. It is getting a little better every day. I don’t move around any because I am a great more comfortable when I am still.

This hospital is a long wooden building built for a government store house and has been used for storing provisions, but turned into a hospital for the occasion. It is a very airy room and is fixed up very comfortably. All the hospitals around the Fort are full. There are probably 2000 in all of them. There is a great plenty of medical attendance as many physicians from the North volunteered their assistance. A government hospital is a good place for a young physician to get posted, for he meets all kinds of cases, and wounds of all kinds. In this room are some 250 men. Some have a leg taken off and some an arm. They have just brought a young man in from the operating room, having cut his arm off near the shoulder. He seems to suffer a great deal. If you want to see the horrors of war, you have only to step into a hospital like this.

Saturday Morning. I feel very comfortable. It is a pleasant morning and a band is playing close by for guard mounting. It seems too bad to lay here from morning to night but it can’t be helped. There are a few secesh in this room. They behave themselves very well. They say although they are conquered, they are not subdued.

There is quite a number of incidents connected with the battle of Williamsburg. During the battle, one of the Louisiana Tigers went up to one of our wounded soldiers — who played dead for fear of being bayoneted — and commenced searching his pockets when a Tennessee soldier came up and saying to him, “Will you rob a dead man?” Shot him dead on the spot. Another rebel came up to a wounded soldier and was in the act of bayoneting him when another rebel came up and knocked the fellow down with his musket and gave our soldier a drink from his canteen. A young man by the name of Aikins in our company was found dead. He had been wounded and afterwards bayoneted. There are hundreds of other cases of kindness and cruelty. In bringing in a boatload of wounded rebels from Williamsburg, a rebel swore that he would kill every Yankee he saw if he could and threw a large knife at one of our doctors, injuring him slightly, when the doctor drew his revolver and shot him through the heart.

There is a man here from Ypsilanti who came to see his son, (of Co. F., 2nd Mich.) who is wounded. He will probably take him home with him as soon as he is able.