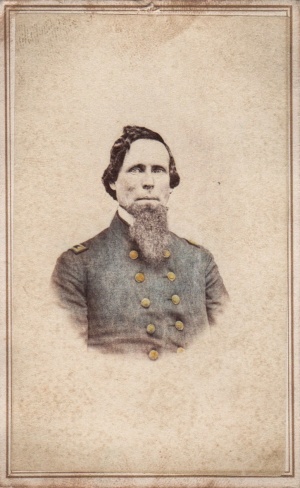 This letter was written by Luther Calvin French (1820-1895), the son of Dudley and Anna French of Painted Post, Steuben county, New York. French was a resident of Hudson, Michigan, when he became an assistant surgeon for the 4th Michigan Infantry in the summer of 1862. As indicated in the letter below, French suffered from chronic indigestion which forced him to resign his commission in the spring of 1863. After he regained his health, he was given permission to recruit for the regiment in Michigan and to later return as surgeon.

I have the honor to tender my resignation of my commission as Surgeon of your regiment, for the following reasons:

Having long suffered from derangement of the digestive organs and dyspepsia, which have greatly impaired my physical powers, I am now suffering from diarrhea and intermittent fever, and find myself unable to discharge my duties. A just regard for the interests of the service, as well a the necessity of a proper attention to my health, induce me to offer my resignation. In view of my previous weakened condition of health, I am confident that I cannot continue in the service and be of any benefit whatever to it, under the further disadvantages and impairment of the diseases from which I now suffer. Under these circumstances, I feel compelled to urge that my resignation may be accepted.

I have the honor to be, Colonel,