You have no doubt heard ere this of my being in Hospital sick and of the length of time I have been here. I am hoping to be able to write that I am rapidly improving and shall be able soon to return to my regt. I write everyday to someone of the family so as to keep you posted and not have you alarmed.

There has been a very hard fight within hearing of here and we are unable to hear what has been achieved but the reports are very unfavorable and I refrain from writing them until I know something definite which I know is this, on last Monday a week Hooker moved part of the Army up the river to United States Ford and crossed, taking the Rebs entirely by surprise. Hooker took up [a] position three miles from the ford and issued a proclamation to the army that he had now a position where the rebels would have to come out of their entrenchments and fight him, which proved to be correct, for they immediately attacked him and were repulsed with great slaughter, Hooker taking many prisoners, guns, etc. So matters went on till Saturday, the rebels still attacking us without any success to speak of.

On Saturday Hooker telegraphed General Butterfield that he had repulsed the enemy at every point and only waited for Sedgewick to carry the Heights at Fredericksburg to make the victory complete. In less than an hour after the dispatch was rec’d, our troops crossed and carried the works at Fredericksburg in splendid style taking many prisoners and driving the enemy back three miles in the country. And here our information stops. We have heard no good news from the front since and I will not write the rumors, which are bad enough. I hope to be able to write something good when we hear the correct statements.

Mark, I forgot to speak to Mother about that strip of land you wanted for a home, but any bargain you can make with her I will agree to and I will wish to hear a solution to the matter as soon as I get better. I hope to hear from you soon and to hear all the news. How does Charlie get along? Tell him his uncle still remembers him and don’t forget me to long. I will write to him tomorrow. 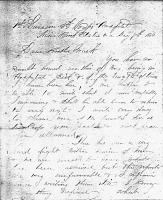 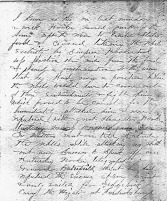 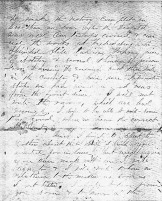 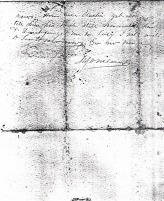 Your kind letter of last week was read thankfully and I was much pleased to hear you had rec’d your money. I am still in [the] hospital as this will show though [I’m] improving slowly.

Thursday evening — Dear Mother, I felt too unwell to write last night and had to leave off as you see. Since then I have rec’d a letter from Louis which says nothing about your having heard from me and I infer you have not. I have written almost every day and to each one of the family and it is because of irregularities in the mail that you do not hear from me.

It seems from your last letter that you all think the Army has suffered a serious defeat but be assured, such is not the case. The army never was in better spirits and have implicit confidence in Hooker. I can not write what took place on the field but know that the army is conscious of having inflicted the most severe blow to [the] rebellion that has been struck during the war. The people do not seem to comprehend the situation of this army which is peculiarly different from any of the various bodies of troops in the field. In the first place, we are entrusted with the protection of the National Capitol. Here is the great secret, if we are defeated the Capitol falls and hence we cannot risk anything, not one point, and for this very reason we were not successful in the last battle as in many others. If we get into a place where we are not sure of a victory, we must not risk anything and we withdraw even if the enemy are retreating at the same time. I wish the people could understand this.

The western army goes into a fight and fights [with] every man they have and as they have only the army to lose if they were defeated, they can risk everything and win battles, though barren of any advantages (Murfreesboro for instance) and gain prestige. But I think [I] have written enough of this. We have won a great victory [even] if we do not hold the battlefield. We killed four of their best generals, captured five thousand prisoners and their loss is their worst one.

All through so good night, — M. J. Vreeland 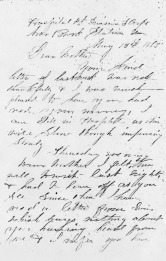 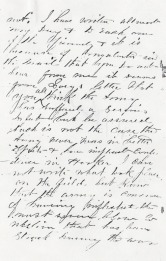 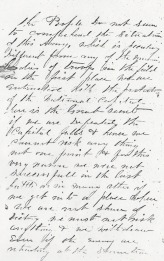 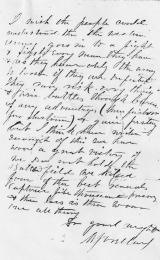