Moses Augustine Luce enlisted as a Private in Company E of the Fourth Michigan Infantry on June 20, 1861. He was twenty-two years old at the time of his enlistment for three years of service. He was promoted to the rank of Sergeant on January 1, 1863, and after serving his term of enlistment, Moses mustered out of service on June 28, 1864, at Detroit, Michigan. This letter (erroneously dated as 1861, but actually 1862), was written to his friend Francis Wayland Dunn, who had attended Hillsdale College with him prior to his enlistement.

Hane has written & I will do the same although but little to write. We came [in] from picket yesterday.

This is the hardest duty we have. We go about two miles in front of camp and place sentinels about 10 rods apart the whole front of the Division. No fire is allowed at the post but there are 3 reserves which relieve the sentinels where we have fires & do our cook[ing] & etc. Our reserve was quartered in [an] old barn which we made our home when off post. We stayed out 24 hours. The last night was very disagreeable, it rained and snowed much all evening, but nobody [was] killed except an old cow who innocently strayed to close to an uncommon fool & an old crow who died for the fun of the thing. Everything tends to an advance which will undoubtedly take place as soon as the weather will admit. How are you getting along, Wayland? How does school go now? Does a senior feel any different from a sophomore? Does a martial spirit still increase in the college? I sometimes get to thinking of the old times at H. [Hillsdale College] and feel as though I should like to be back to enjoy those privileges again & then I feel that I am doing that which is my duty and by the power “I’ll fight it out”. We are all comfortable & healthy, ready for work. Let us hear from you often. “Old words sound sweetly” 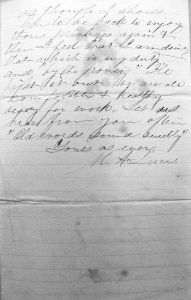