Richard R. Lassey was born on October 13, 1832 in Leeds, Yorkshire, England. His parents were William and Mary Graham Richardson Lassey, who were both from Leeds as well. The family moved to Monroe, Michigan in 1835. On January 19, 1853, Richard married Lydia Maria Peabody and they went on to have six children. On June 20, 1861, Richard, along with his two brothers, John and William, enlisted in Company A of the Fourth Michigan Infantry. Richard was taken prisoner during the battle of Gettysburg, Pennsylvania on July 2, 1863, and ended up as a prisoner of war at the camp on Belle Isle, Richmond, Virginia. He died of tonsillitis in General Hospital #21 (C.S.A.) in Richmond, Virginia, on December 26, 1863. He is erroneously buried under the name “R. R. Labey” at the National Cemetery in Richmond.

This 1934 example of the Udin Latin Alphabet is being shared in order to try to explain how Richard Lassey’s last name was altered to “Labey”.  During the American Civil War when writing a double ‘s’, such as in the word “crossing” for example, the “ss” was often replaced with what was then called “the long f”. There is a sample of the long f in cursive (both in upper and lower case) in the second pair of letters from the bottom of the chart, in the third column, . If you look at the lower case “long f” that’s found there, and compare it with the lower case b in cursive, you’ll find a strong resemblance. Somewhere among the wartime documents kept by the Confederate Military clerical staff, someone had written “Richard Lassey” on a form using the “lower case “long f’ …” Richard Laƒey “. The clerk inadvertently shortened the lower loop of the “lower case long f” which was then mistaken for a lower case “b” in cursive. Compare the two cursive lower case letters “b” and “ƒ” on the chart, shorten up the lower loop of the “ƒ” and you’ll understand how it happened.

The following letters are shared through the courtesy of one of Richard Lassey’s descendants, Kerry Kasper DeCoteau.

I seat myself [down] to write you a few lines to you to let you know that I am well and hope [that] you are the same. I received your letter last night and was glad to hear from you and to know that [you] are well. We are all confusion this morning for we are all packing up to move ½ mile to a fort.1 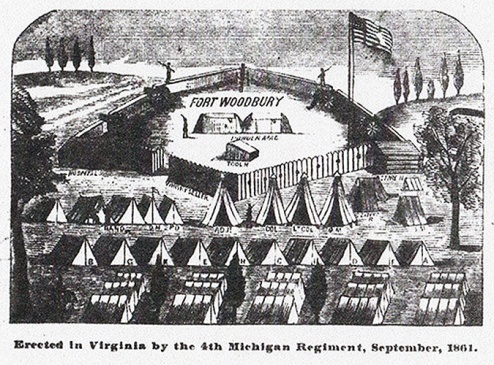 A wartime drawing of Fort Woodbury, erected by the Fourth Michigan Infantry in 1861, and name after it’s Colonel, Dwight Woodbury.

I don’t know the name of it. You said that you [had] heard that Sam Bisonette2 was dead. It’s no such a thing. He is well and has been ever since he come here. I have no news to write to you. The Rebel cavalry come down every day in sight of our pickets but they are sure to keep out of range of our guns. There is no danger of our pickets for they are all inside now. I will show you how they are stationed…3 men on a post, except at headquarters, and there is generally 10 or 12 there. And in case of an attack, that is the rallying point. We have 1000 men on picket, 100 from each regt. Each company has it’s own rallying point. Some of them is 2 miles from our camp.

Richard Lassey’s map found in his letter dated August 18, 1861. (The map has been digitally edited only to for the sake of clarity and to resolve deterioration issues).

The map I have drawn will show you how we stand. Our Pickets go from our camp to the church. The tavern at the crossroads is our headquarters. We are a ½ mile from the river and there is lots of regts. between us and the river. The other pickets are New York3 and Mass. boys4. Their lines run for miles in the same direction, north and south, but no further west. This will give you a faint outline [of] how we stand. There is about 180,000 men scattered around here. There is a line of regts. with ours, as I have drawn the line, clear to Alexandria, the distance of 8 miles.

1 Fort Woodbury was built and manned by men of the Fourth Michigan Infantry.

2 Private Samuel Bisonette was alive at this point in time but would eventually be killed in action at Gettysburg, Pennsylvania on July 2, 1863.

4 This is a reference to the 9th Massachusetts Infantry. 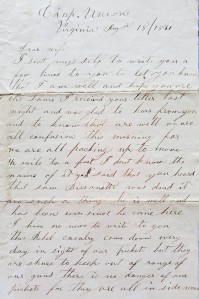 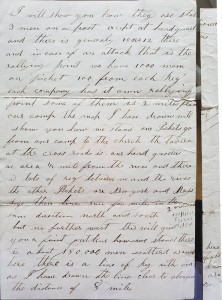 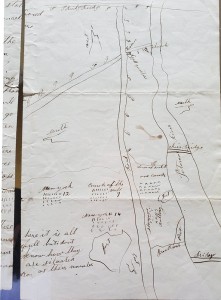 I seat myself [down] to write you a few lines to let you know that I am well and hope you are the same. I received your welcome letter tonight and was glad to hear from you. I wrote to your father and sent you a picture, but you did not say whether you got it or not. The boys are all well at present. We are a going to have Charlie Fournia1 and George Brimingsted2 in our Company. They all a going to let 2 of our men go in their place. Dave sent word to Bill that he would get him exchanged if he would only come in the Regt. with him. But I guess Bill is satisfied to stay where he is. The weather here is beautiful. Here we have not had any snow or any very cold weather yet. It is just such weather as we have in Michigan in the Indian summer. Bat Fournia3 and I was down to the crick yesterday, stripped off and washed off all over. So you see that it is not very cold. They drill us like the very Devil nowadays. I don’t know, but I think you don’t get all the letters that I send, so from this time [on] I will number all the letters that I send to you so you can tell if any is lost. Tell Mary that I got a letter from Mose tonight and all the folks in the windfall are well at present. Tell Mary Hannah that I was glad to hear from her and tell her that if Uncle Jack promised her a pair of boots, he had ought to get them for her. I am as fat as a pig. I weight 178 lbs. without my coat on. That is [a] pretty good weight don’t you think so? If I could only see you and the rest of the folks, I would soon weigh 200 [lbs.]. For that is all that I have to worry me, to lay out in the woods and look up at the stars and think of the loved ones at home. There is plenty here to draw a mans attention, if he is a mind to join in the sports, but I am getting quite seedy. Give my love to all of our folks. Give my respects to Mrs. Wolcott and the girls. Goodbye and keep up good courage for I will come back if I have good luck.

Richard Lassey’s military tombstone is located in the National Cemetery in Richmond, Virginia, and has an erroneously misspelled last name of “Labey” inscribed on it.

If it is my lot to lay my bones on [the] fields of Virginia, it will be so, but I never expose myself needlessly. But I shall always do my duty so that you shall never hear that Dick was a coward. No more at present.

P. S. Pete wants to know where Sarah makes her headquarters. He sends his respects to all of your folks. So do Bill and Jack. Tell Jack when you see him that if he can’t afford to pay postage I will send him some stamps & paper. My love to all.

2 This may be a reference to George Brimingstall who apparently waited to enlist in Company L of the First Michigan Engineers and Mechanics on July 15, 1863.

3 This is probably a reference to John B. Fournia of Company A 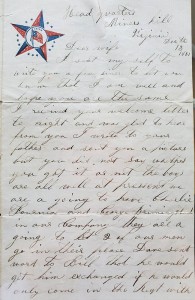 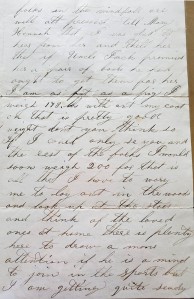 Copy this and keep it and show it too.  All that is marked “left” is in the hands of the enemy.

Richard Lassey’s personal record of the killed, wounded, and missing of Company A from June 27,1862 through July 1,1862.

I improve the present opportunity to let you know that I am still alive, but not very well, for I am afraid that we will have to stay here [as] prisoners as long as the war lasts.

A wartime view of the cemetery for Union Prisoners who died on Belle Isle, Richmond, Virginia during the war. The bodies of the Union prisoners were re-interred after the war in the National Cemetery in Richmond. Richard Lassey was among those that were re-interred.

My time was so near out to soon be home that my that my captivity wears on me. I have been a prisoner [for] over 4 months and have not heard from home since June. I wrote to you before, and to Will, but have not heard from either of you. I do long for home worse than any school boy you ever [saw].

You must not seal your letters 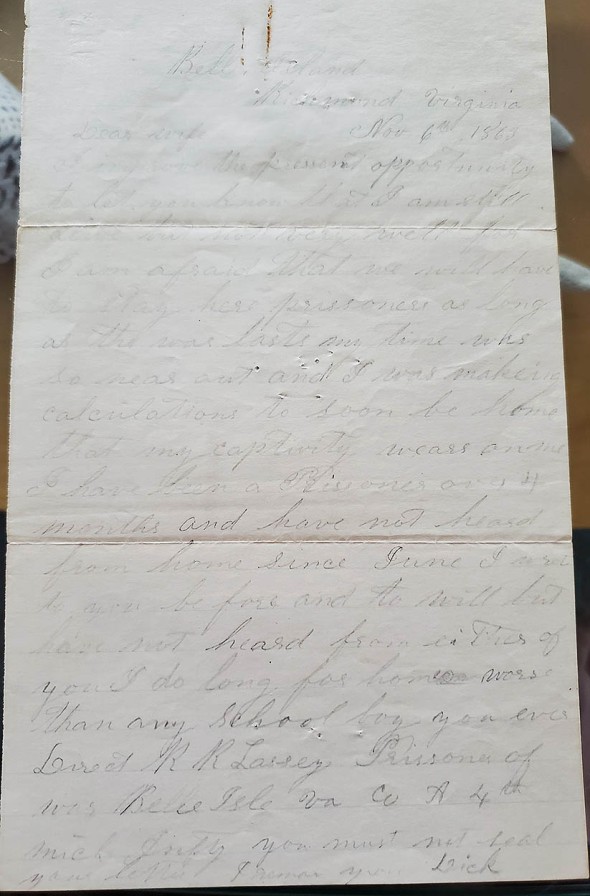